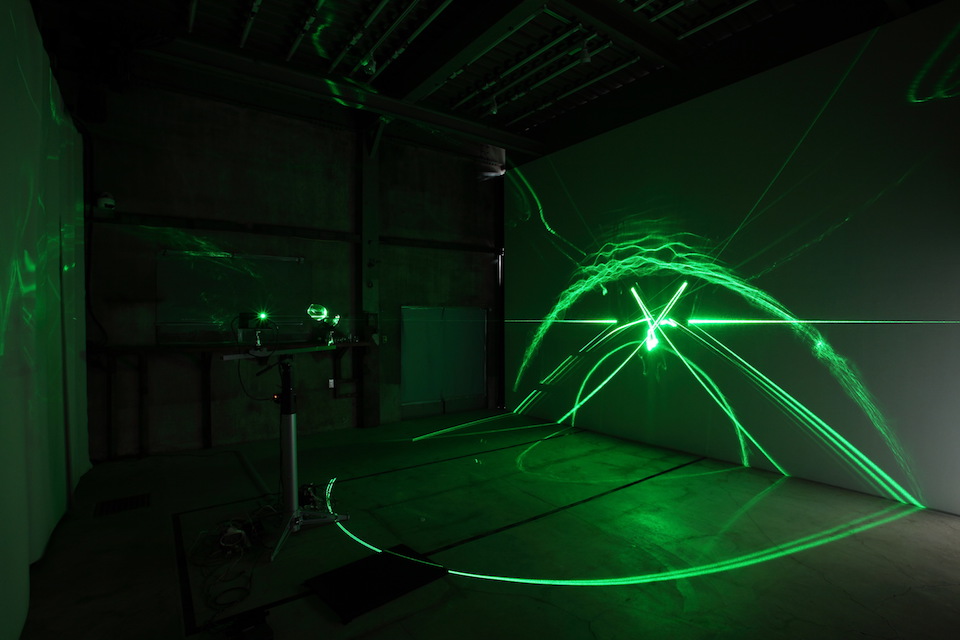 Shimizu Jio is an artist who magnifies the unique characteristics of sound, light and vibration – elements of the physical world – visually reproducing the physical phenomena he has elicited. From 1994 to 2006, he was a member of the collective WrK with sound artist Toshiya Tsunoda and others with similar approaches, also functioning as a CD label. He creates/presents conceptual works and performances which from day one have maintained the common thread of focusing on the nature of moment-to-moment alterations in events and phenomena over time, and on the vicissitudes of our own attitudes and perceptions in response. In addressing his unique voice to these gestures and fluctuations of the physical world, above all he has endeavored to make the invisible visible for us. In recent years, he has created large-scale installations in museums both domestically and abroad using red and green laser beams, and expanded the very vocabulary of the laser making photographic works in which he creates moiré patterns directly onto photographic paper though the shining of lasers through transparent physical matter such as glass.

In the present Elements installation, Shimizu positions his lasers extremely straight and parallel, shining them through an ostensibly smooth glass surface; the interference results in the unique distortions of the glass dilating the light, and stunningly turning the wall of the gallery into a moiré pattern. We will also be presenting photographic works of his, directly printed by shining lasers through glass.

In the installation, we encounter the simulation of the expanding and contracting of energy through the images of atoms and electrons, engendered from our recognition of a “straight line” existing only as a concept, and the revelation of the character of the glass on a minute level. The work is surely urging us to ponder about science, art, and ethics.

Elements is the gallery’s first exhibition to be presented by a guest curator, and it is Shimizu’s first solo exhibition in Japan in 5 years. The artist himself will be giving a performance on opening day.

Shimizu Jio
Born Tokyo, 1966. Received his MFA in the Graduate School of Art at the Tokyo University of the Arts and is presently based in Saitama. In 1994 he founded WrK with Toshiya Tsunoda and others. He moved to Copenhagen in 2008 as an overseas trainee in receipt of a grant from the Agency for Cultural Affairs, thereafter remaining to live and work until 2010. Some of the major shows he has exhibited at have included “Roppongi Crossing” at Mori Art Museum (Tokyo, 2004), the Busan Biennale 2008 at the Busan Museum of Art (Busan, 2008), and “Simple Interactions. Sound Art From Japan” at the Museum of Contemporary Art Roskilde (Copenhagen, 2011).

Sometimes we are intoxicated by physical phenomena, the elements of the natural world. On the one hand, for example in the case of nuclear power, theories and technology which humans have gained from science, become a violent menace that assaults us. We Japanese, terror-stricken by radiation since March 11 last year, have had this barbarousness of science thrust forcibly upon us.

Yet can we really place the blame on science or scientists? Science, free from ethics, has done nothing but singled out the elements of this physical world in which we all exist, quantifying and defining the laws of nature.

Shimizu’s approach to his work as an artist resembles this aspect of what scientists do. By causing a laser beam in green (one of light’s primary colors) to shine and reflect through some essential material, he transforms the elements that organize the natural world into something we recognize as beautiful.

But if we recall that this kind of beautiful laser itself was in fact a weapon developed for war, we realize that the beauty brought about by the mechanism Shimizu has assembled is also a succeeding chapter in a barbarous history. Shimizu does not question the ethics of this.

Subsequently, just as is the case in some instances in science, Shimizu’s works prompt a re-examination of the rapport between beauty and cruelty. What makes his work not purely scientific is that he impels us to realize once more that “beauty” is one of the elements making up the world we live.

Guest Curator：AZUMAYA Takashi
Independent Curator. Born 1968, Yokkaichi City. Received his MFA from Tokyo University of the Arts. After working at the Tokyo Opera Art City Gallery, as a curator at Setagaya Art Museum, on the staff of the Yokohama Triennale 2001, and as a curator at Mori Art Museum, he is now freelance. Some of the major exhibitions he has curated have included “ART/DOMESTIC Temperature of the Time” at Setagaya Art Museum (Tokyo, 1999) and “GUNDAM: Generating Futures” at the Tempozan Suntory Museum (Osaka, etc. 2005-07). He was Artistic Director at the Busan Biennale 2010.