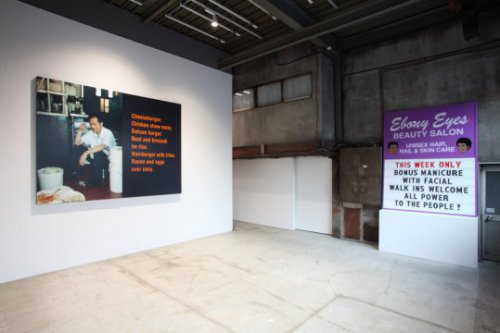 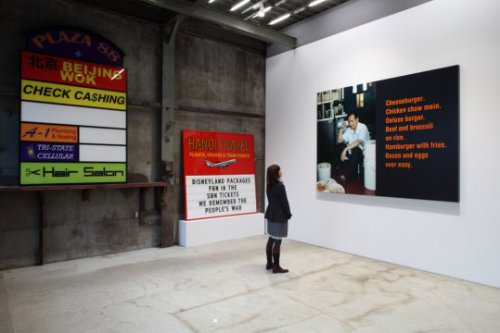 Ken Lum, born in 1956, is an internationally active artist based in Vancouver. His work approaches everyday social structures with a critical eye and an ironic sense of humor, traversing a wide variety of media that includes photography, sculpture, painting and installation.

LUM’s art is concerned with the ways in which identity formation intersects with society’s transformation. This focus is deeply connected to his birth to Chinese immigrant parents in Vancouver, a city of numerous ethnic groups. In his works which use the visual language of public signage, billboards, logos and the mass media, he aims to demystify the tensions and contradictions of living in an increasingly globalizing world. His chosen approach continues to question the very nature of culture in contemporary society, by dismantling pleasant phrasings and blurring the boundaries between high art and popular culture.

Five representative works produced since 2000 will be presented.

He began his Portrait-Repeated Text project in 1994. The people depicted appear to clearly be from the lower economic classes, and the repeated phrases featured alongside the photos seem to be venting their inner worries. “Cheeseburger” depicts a man who looks like a Chinese immigrant taking a break in a restaurant kitchen, while the words of the menu appear next to him. We sense a kind of obsession with the fact that in English, which is new to him, the language of the menu is more important in his daily life than other words we might ordinarily think of as useful. Moreover, the picture depicts a break or pause in the man’s working day. His sputtering of the menu during this moment of rest suggests certain madness has taken hold of him.

In his Shopkeeper Sign series, LUM inserts personal murmurings and political statements into what should otherwise be purely functional signs, confounding their original purpose. “Hanoi Travel” is a travel agency sign, in which the insertion of the line “WE REMEMBER THE PEOPLE’S WAR” immediately strikes a minor note, while simultaneously raising questions about the private sphere and public culture.

The Strip Mall Sign series, a collection of small business signs that might be found almost anywhere, suggests the state of the lives of immigrants on a global scale, as well as pointing to a homogenization of their identities. His work tells the story of the current state of immigrant communities through things like white spaces indicating a dearth of tenants, and the inclusion of phrases like “CHECK CASHING”.

LUM has represented Canada at numerous international exhibitions including DOCUMENTA 11 (2002), the Istanbul Biennial (2007), and the Gwangju Biennial (2008). In addition to working on large-scale public art work in places like Canada and Europe, he has curated the show “The Short Century” (2001) in collaboration with curator Okwui ENWEZOR.

This will be LUM’s first solo show in Japan exhibiting his masterworks since 2000. We look forward to seeing you at this momentous event.