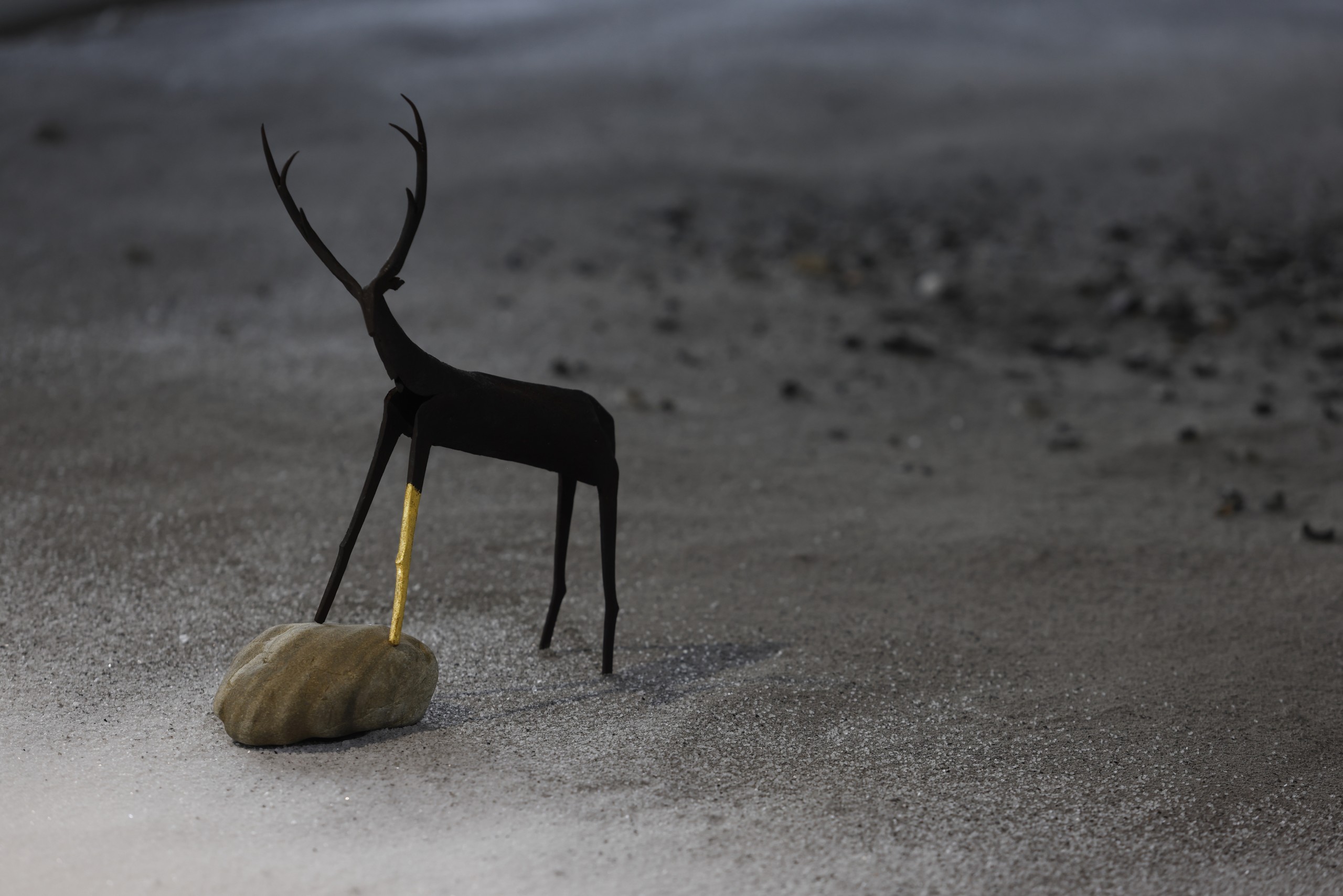 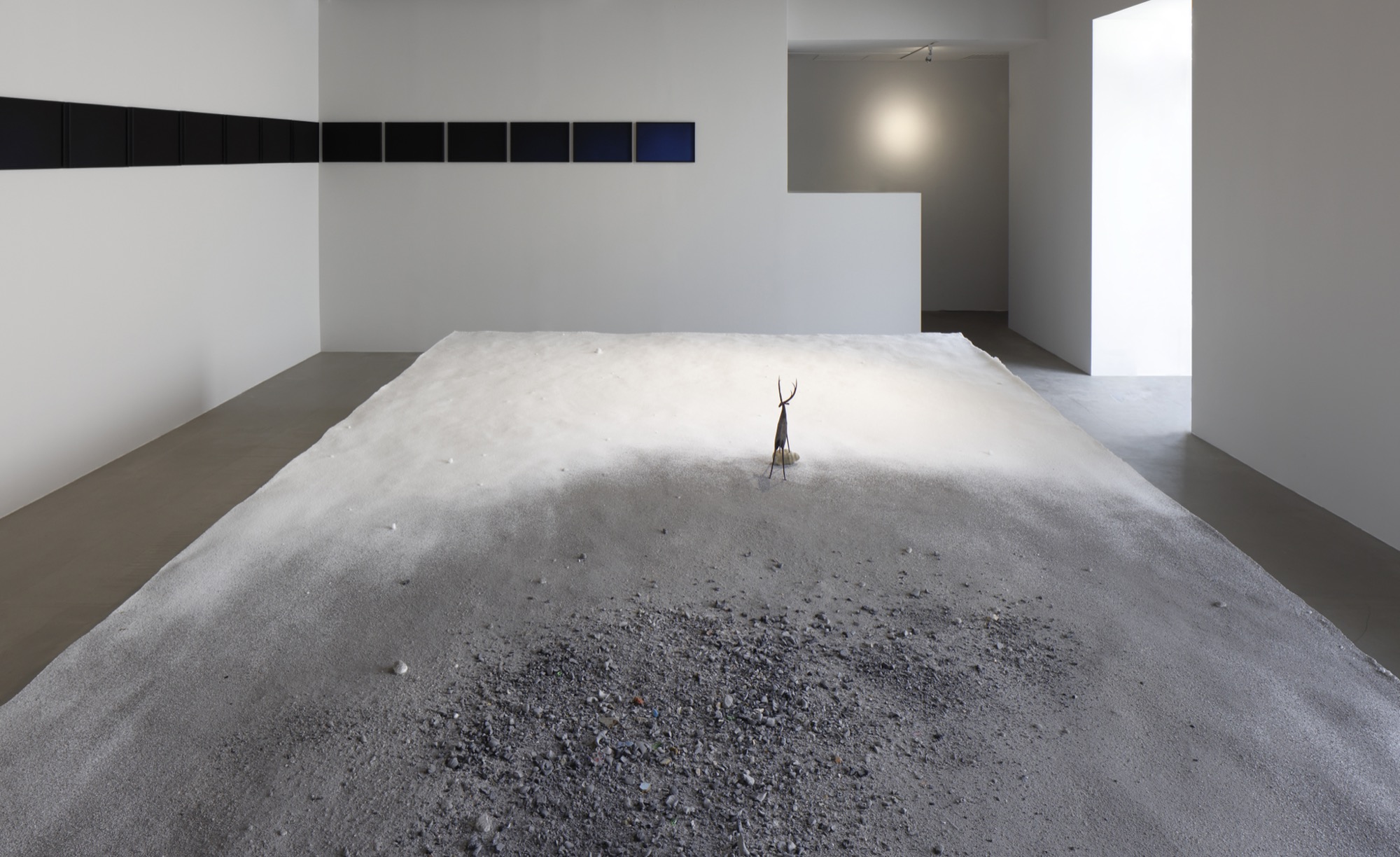 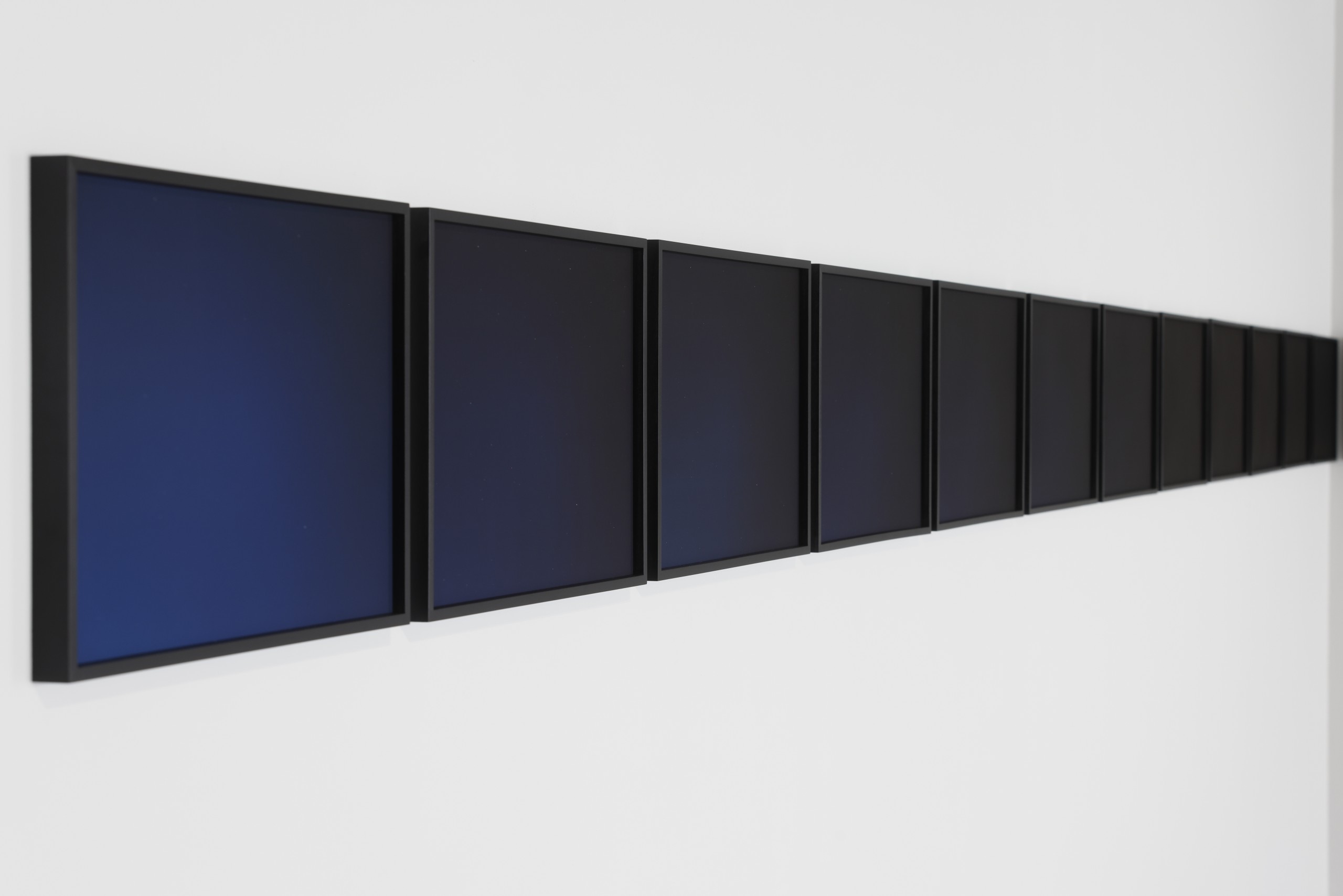 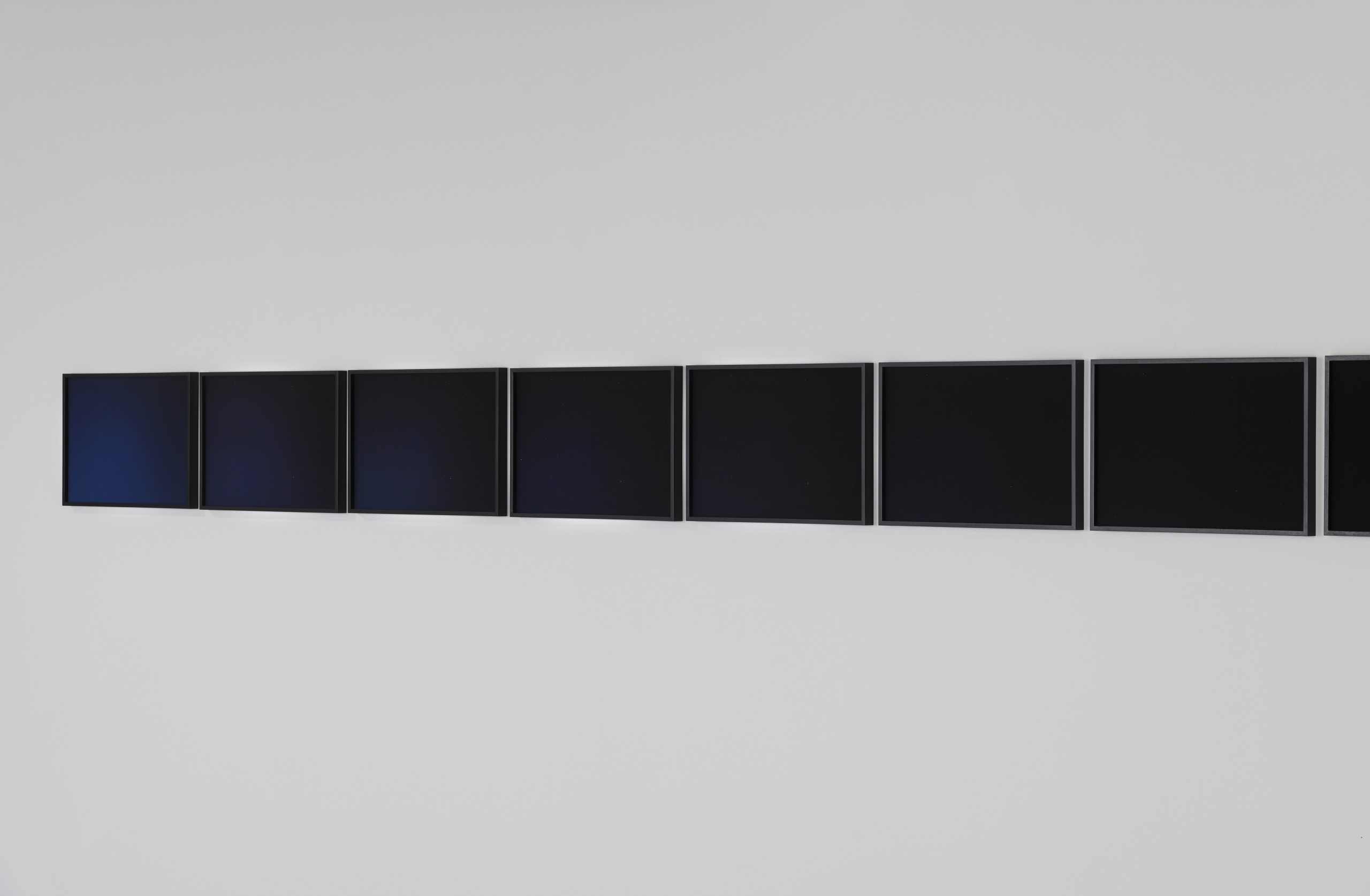 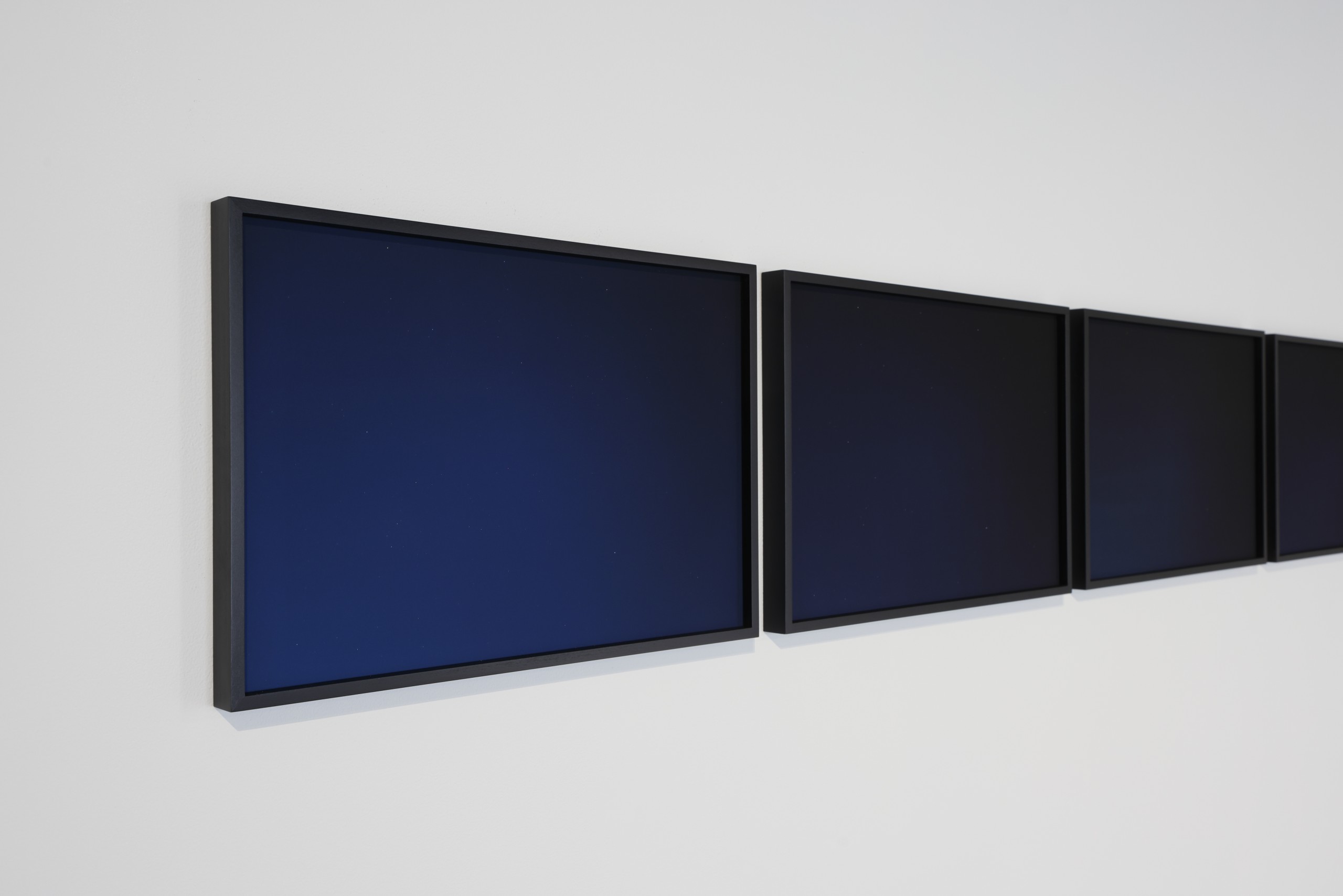 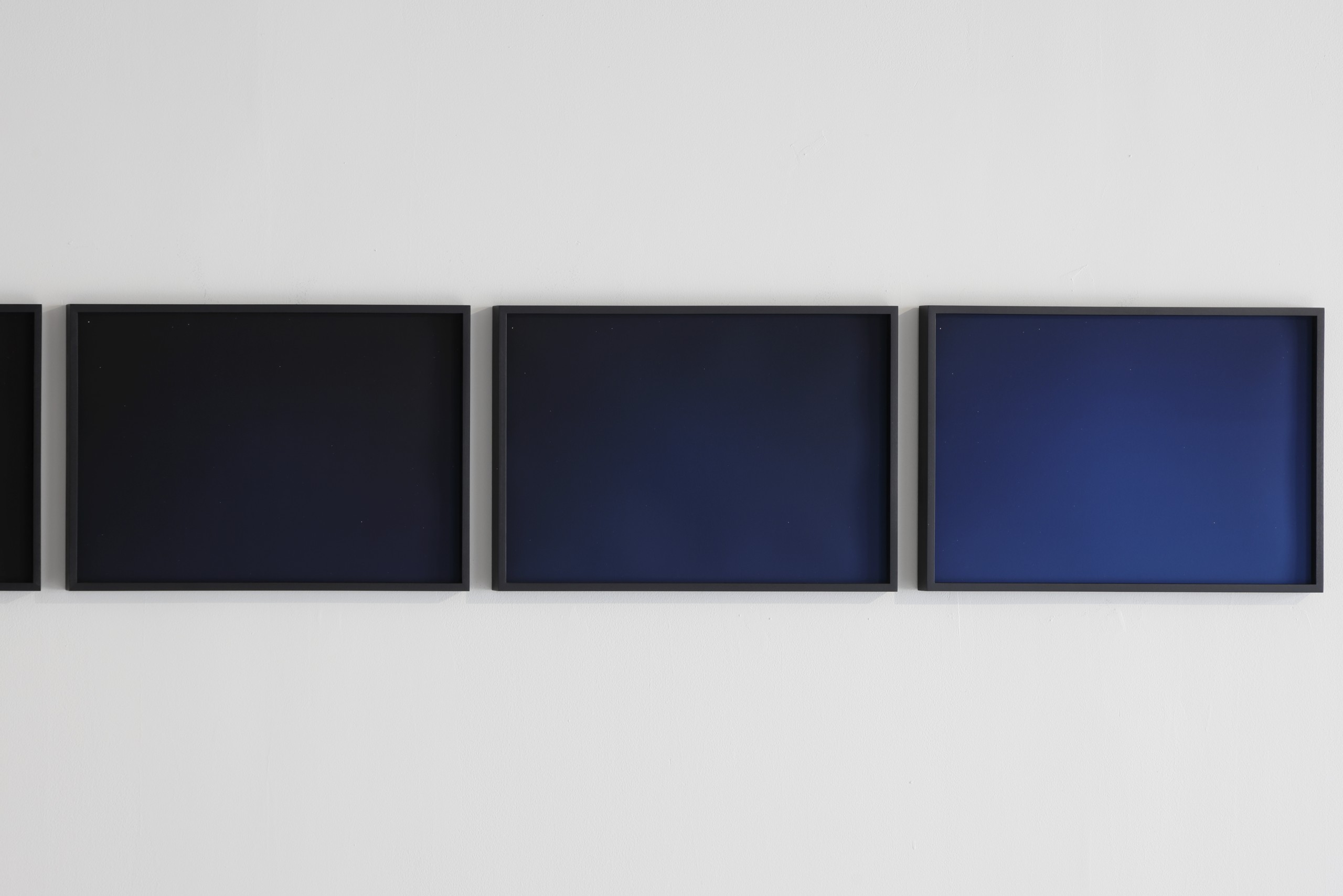 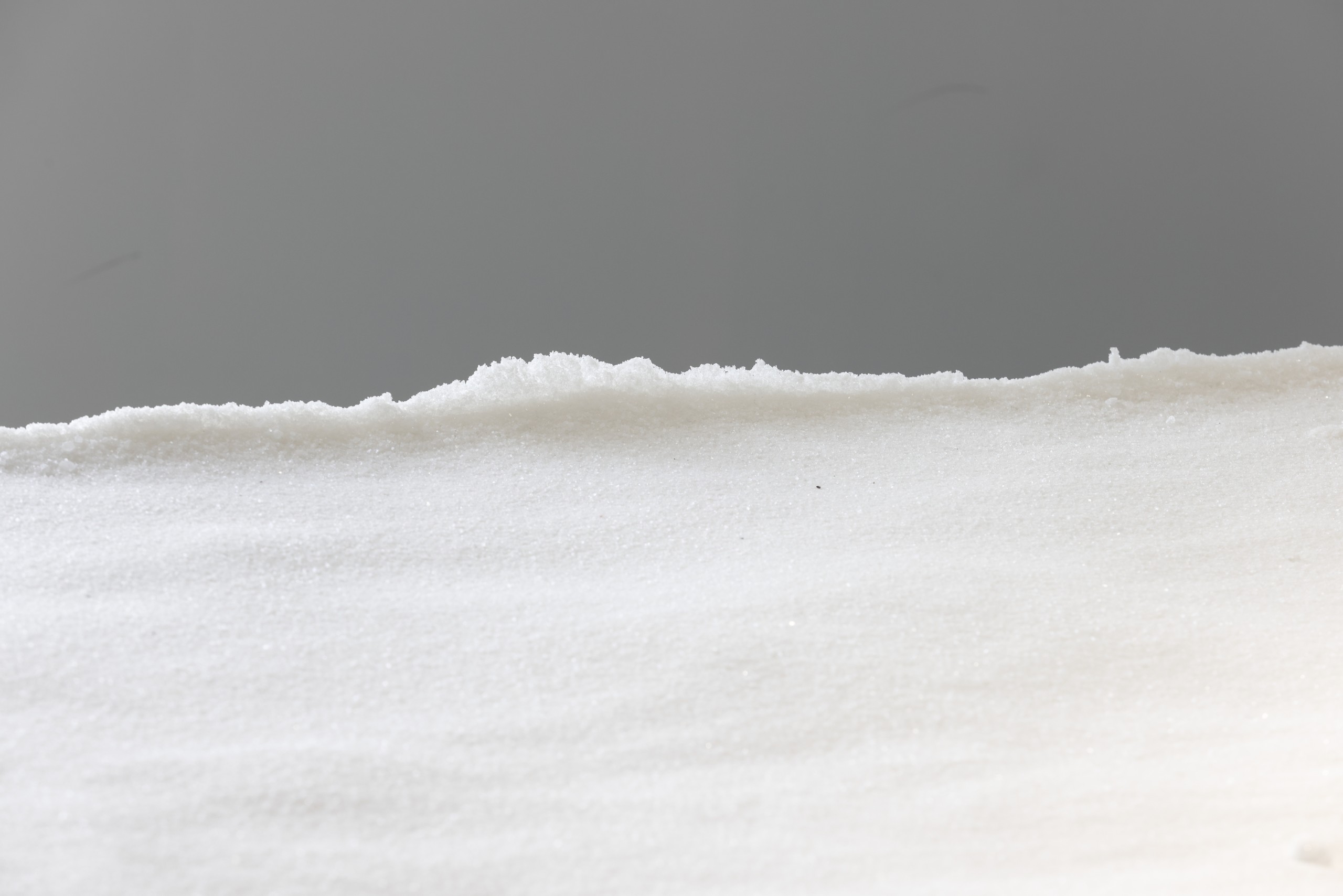 The Oldest Story of Today can be considered a condensation of Jae Eun Choi’s world view. We live in a time of disaster and wars, and have to ask what we can call our time, other than ‘today.’ Today is simply what we have been given, but at the same time it will keep coming around, for ever. It is vivid like salt, and, like wind-scattered ashes, it leaves nothing behind. Such a ‘today’ is probably engraved in everyone’s memory.

Choi’s practice has long addressed questions of the life-cycle and time. Her new installation consists of salt, ash, a deer, photographic works of the sky playing above them, and the sound of small drops of water falling. Its lyric composition quietly brings to mind the infinitely revolving story of time and life, a story continuing since time immemorial.

Salt piled up in a small heap on the floor is covered in parts by ash, and there is a sculpture of a deer with a gold colored leg. Salt is essential for human life, and in ancient civilizations it was sometimes traded for its weight in gold. Over history there have been disputes over the right to produce salt, and salt taxes have even triggered wars and revolutions. The history of salt is the history of humankind. In Japan, salt has a place in religious rituals, with piles of salt used to bring good luck, and salt used for purification. In contrast, the ash strewn over the salt recalls lost memories of great numbers of sacrifices, destroyed by fire and, unable to return to their original form, no longer retained. The deer appears in myths around the world, and Japan is no exception, with the deer depicted as a sacred presence or a spiritual medium. In Greek mythology, there is the story of Actaeon, transformed into a deer as punishment for peeping at an uncloaked divine. The deer’s leg is dyed gold, symbolizing the secrets of nature and of the world that were made manifest through the original-sin-like glance for which the Actaeon was sacrificed, punished for seeing something that should not be seen.

In April 2011, Choi conducted a project that involved taking a photograph of the sky once a minute for a full day—twenty-four hours—from an olive grove at the edge of the sea in Puglia, Italy. Called the Puglia Sky Project, it resulted in a series of 1,440 shots. Choi’s installation incorporates eighteen shots from that project, showing the sky changing minute by minute during a nine-minute period at dusk, and a nine-minute period at dawn. Puglia is a region bordered by sea to both east and west, with a long history of being home to many different peoples and being controlled by many different rulers. Choi’s series of photographs taken in a village in this Italian region brings into contrast between the unchanging cycle of the universe and the different time in which we live below the skies.

Her installation provides its own unique language to depict sharing and the time cycles of living things that live for minuscule periods of time. Experiencing it triggers thoughts about things such as the path walked by humankind, and the state of current society and the world.

This is Jae Eun Choi’s first solo exhibition at MISA SHIN GALLERY since 2017.

Jae Eun Choi
In 1976, she moved to Japan where she studied the Sogetsu style of ikebana. She worked as an assistant to Hiroshi Teshigahara, the third generation master of the Sogetsu school on numerous installations and the film “Rikyu”. From the 1980s onward, she has been producing artwork around the themes of life cycles and time. In 1986, she presented an installation “Earth” at “Heaven” designed by Isamu Noguchi, Sogetsu Plaza Garden, Tokyo. In 1993, Expo’93 (Taejon, Korea) she designed the Recycle Art Pavilion which was the Korean government pavillion. In the same year, she presented a tea house “Une Surrender Lune” at Grand Tea Ceremony in Paris, UNESCO, together with Tadao Ando, Charlotte Perriand, Ettore Sottsass and others. In 1996-2000, she designed stupa for Grand Master Sengcheol in Haeinsa Temple, Korea. In 2000, she directed a documentary film “On The Way”. She has participated in a number of international art exhibitions such as the 1991 São Paolo Biennal, the 46th Venice Biennale in 1995 where she represented Japan, and the 2016 Venice Biennale of Architecture. Solo exhibitions include Lucy and Her Time at the Samsung Gallery (Seoul, 2007), Forests of Aśoka at the Hara Museum (Tokyo, 2010) The house that continuously circulates at the National Gallery (Prague, 2014) , and The Nature Rules: Dreaming of Erth Project at Hara Museum (Tokyo, 2019). Ongoing projects are “World Underground Project” in which paper is buried within the earth for a period of time started in 1986, and working on a plan to restore destroyed forests as an extension of the “Dreaming Earth Project” in the Demilitarized Sone (DMZ) on the Korean Peninsula which launched in 2014.