Ozawa Tsuyoshi “Can You Do It?” 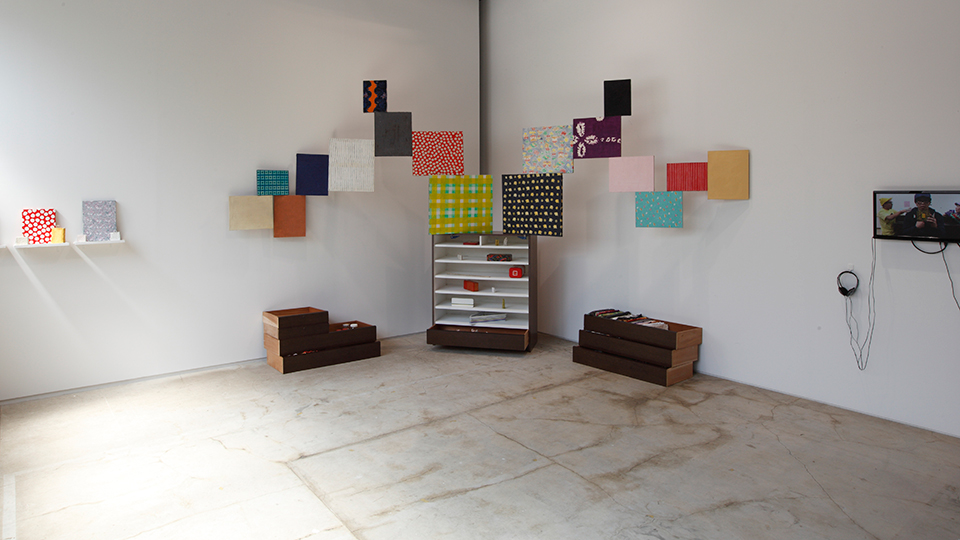 Ozawa Tsuyoshi Can You Do It?
Installation view at MISA SHIN GALLERY
Photo: Keizo Kioku

Born in Tokyo in 1965, Ozawa is an artist known for works full of humor and wit, commenting on history and the times in which we live with a supple sensitivity and creativity.

Ozawa’s series of works in Japan and around the globe maintain a critical edge without shouting unnecessarily, slyly enticing the viewer with a unique warmth, from his “Jizoing” series, where he adds the hand-drawn image of the god Jizo to pictures taken in different places; his “Nasubi Gallery” works that use unassuming wooden milk boxes as miniature art galleries; and the “Vegetable Weapon” portraits of women holding weapons made out of food. His “Museum of Soy Sauce Art” gently re-imagines the history of Japanese paintings, reproducing famous works using soy sauce as a medium.

Although he is known for work heavily influenced by his many travels around the globe, the present show “Can You Do It”?” emerged from much more personal experiences.

In 2010, Ozawa imitated Nopposan from the classic early childhood educational TV show Dekirukana (“Can You Do It?”) for his exhibition at the Fuchu Art Museum. He brought with him the yomeiru dansu (a kind of traditional Japanese dowery chest, with drawers) left behind by his deceased mother-in-law. It was filled with fabric scraps, paper bags, empty cans and bottles, wire hangars and throwaway chopsticks; bits and bobs that his mother had collected and planned to use before she passed away, but with almost no intrinsic value. Dressed as Nopposan, Ozawa tore up the paper bags, putting them into a blender and reconstituting them as small paper bags again. He fixed the scraps of fabric on canvas, steadfastly retracing their colors and patterns in oil, on top of the original designs. One aim of these actions is to take things that have been discarded and give them new meaning by reducing them to their essence.

The following year, Ozawa put on “Can You Do It?” again, this time at the Aizu Urushi Art Festival in Fukushima Prefecture, collaborating with a lacquer craftsman, who re-finished the same yomeiri dansu with a lacquer style native to Urushi. Since even insignificant mundane items have traced upon them irreplaceable memories and experiences, this one woman’s private recollections become connected to the memories of daily life of those who lost their household belongings in places like Fukushima.

“Can You Do It?” is based in Ozawa’s own very personal experiences, but his choice to re-envision and re-constitute his mother’s items succeeds in making it something anyone can share, uncovering our universal memories and experiences.

Ozawa Tsuyoshi
Born in 1965 Tokyo. Participated in exhibitions at museums and biennales worldwide, including the Venice Biennale. Major solo exhibitions include “Answer with Yes and No!“ Mori Art Museum (Tokyo, 2004) and “The Invisible Runner Strides on“ Hiroshima Contemporary Art Museum (Hiroshima, 2009). His works are in public and private collections including ZKM (Germany), the National Museum of Art, Osaka, UBS, Kamata Soy sauce Company.