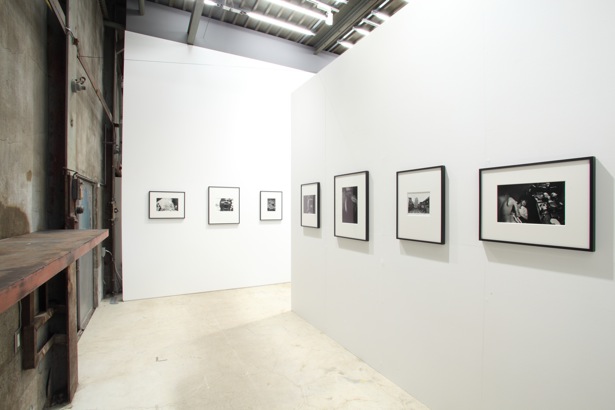 Tomatsu Shomei was born in 1930 in Nagoya, Japan, and currently lives and works in Okinawa. Tomatsu is considered one of the most important figures in Japanese postwar photography. His works have dealt with such subjects as American military bases, Nagasaki after the bombing, and Okinawa – all present critiques of social issue in postwar Japan.

The exhibition includes 20 vintage prints, which were taken mainly in 1969 and during a period between 1964 and 1971.

Around 1970 was the period when existing values went through a major transformation and young people shared a desire to effect change. The feeling was that the period of Japan’s rapid modernization was coming to an end and that Shinjuku was the symbol of that chaotic time. After Tomatsu graduated from a university in Nagoya, he spent most of his time in Shinjuku, vigorously seeking out incidents to document.

As a photographer, he lived through one of the most passionate periods in Japanese history. His works document a time when the nation was full of energy.

Tomatsu also collaborated with others beyond his chosen field. He worked with other artists, architects, and avant-garde dancers.

Tomatsu Shomei
Born in 1930 in Aichi Prefecture, Japan. Currently lives and works in Okinawa, Japan. Tomatsu was studying economics at Aichi University when he started taking photographs. After working at Iwanami Shashin Bunko (Iwanami Photograph Publicity), he began working as a freelance photographer in the 1950s. Recent major exhibitions include “The Chiseling of Time” at the Nagasaki Prefectural Art Museum (Nagasaki, Japan, 2010), “Tokyo Mandala” at the Tokyo Metropolitan Museum of Photography (Tokyo, 2007), “Shomei Tomatsu: Skin of the Nation” at San Francisco Museum of Modern Art (San Francisco, 2006). From April 23, 2011, the exhibition “Tomatsu Shomei: Photographer” will be held at Nagoya City Art Museum.