Shinoda Taro “The Sun and Mt. Fuji and Steve Reich” 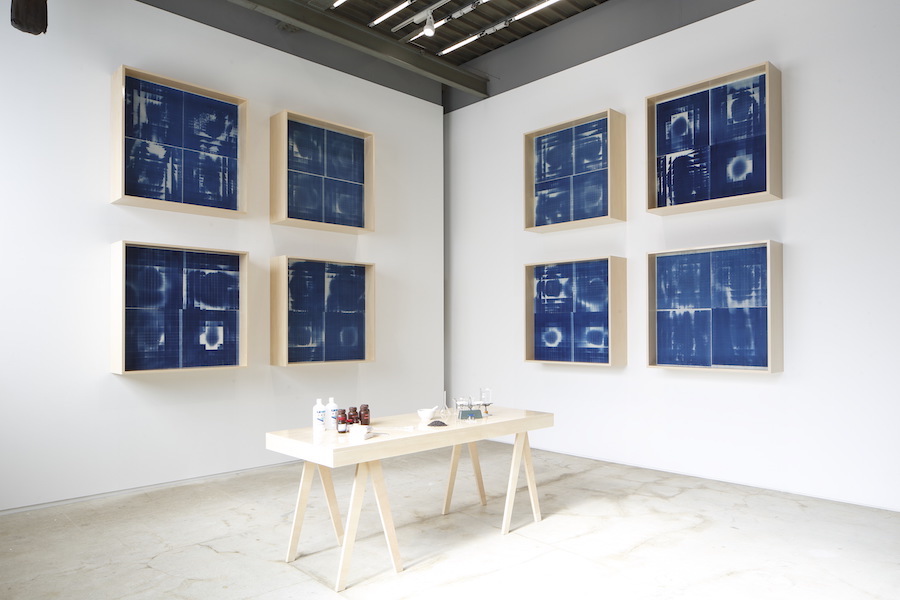 Shinoda Taro was born in 1964, and studied landscape gardening before becoming a visual artist. This background informs his practice, with his large-scale pieces suggesting a new kind of relationship between humans and nature, based upon an understanding that sees everything in the universe, including the cosmos itself, as an evolving form of nature coexisting with human endeavor. In recent years, by pondering the relationship between humans and the contemporary urban landscape or our everyday settings with their reliance on advanced technological elements, he has been deepening his insight into the concept of ‘nature’ as an abstraction that includes lifestyle, society and culture within its scope.

‘The Sun and Mt. Fuji and Steve Reich,’ the artist’s first solo exhibition at MISA SHIN GALLERY, is a series of blueprint works. Blueprint is a photo-printing technique that makes use of the photosensitive properties of iron compounds. On top of photographic paper coated with iron salts, the artist places sand and pebbles collected at the peak of Mt. Fuji, installing speakers underneath the photographic paper through which the minimal music of Steve Reich is played. Exposure to the sun ensures that the sand and pebbles vibrating with the sound patterns create shadows and lines on the paper’s surface. In this way, sunlight— nature’s most fundamental force—brings the usually invisible vibration of sound into view. Transcending the artist’s design, these works in Prussian blue emerge like natural phenomena.

“Our civilization has been made possible through our engineering of the existing
substances on the earth—except, that is, for nuclear energy. In other words, we cannot create substances themselves, but we can transform one exsiting substance into
another. Again leaving aside nuclear power, all human endeavor is dependent on the sun and what it makes possible, from plant photosynthesis through to the functioning of the food chain and production of fuels.”

Visitors to ‘The Sun and Mt. Fuji and Steve Reich,’ are invited to observe the traces of the process whereby elements that appear naturally on the earth’s surface—such as light from the sun, minerals of the earth, vibration of sound—are transformed through chemical reaction into different substances.