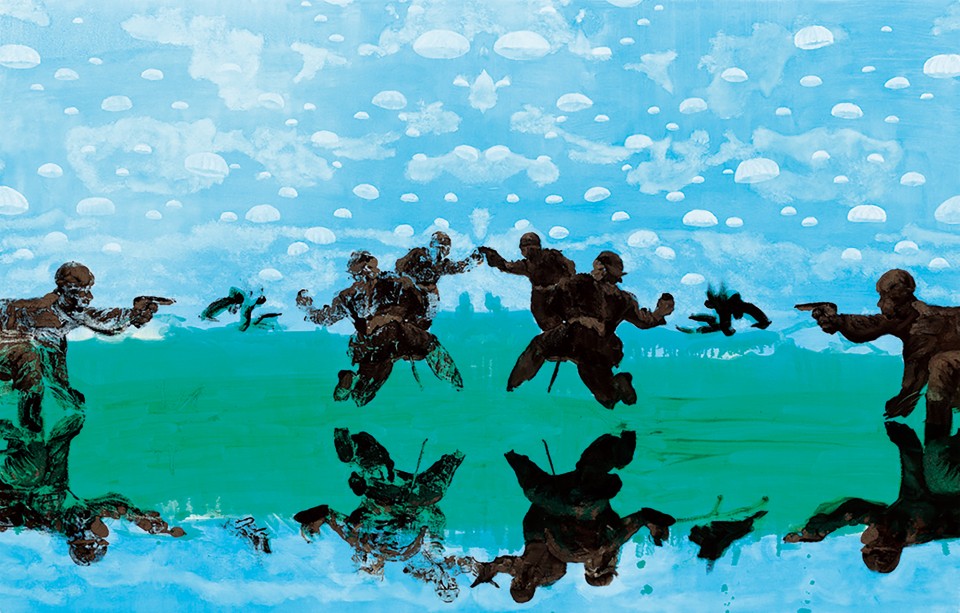 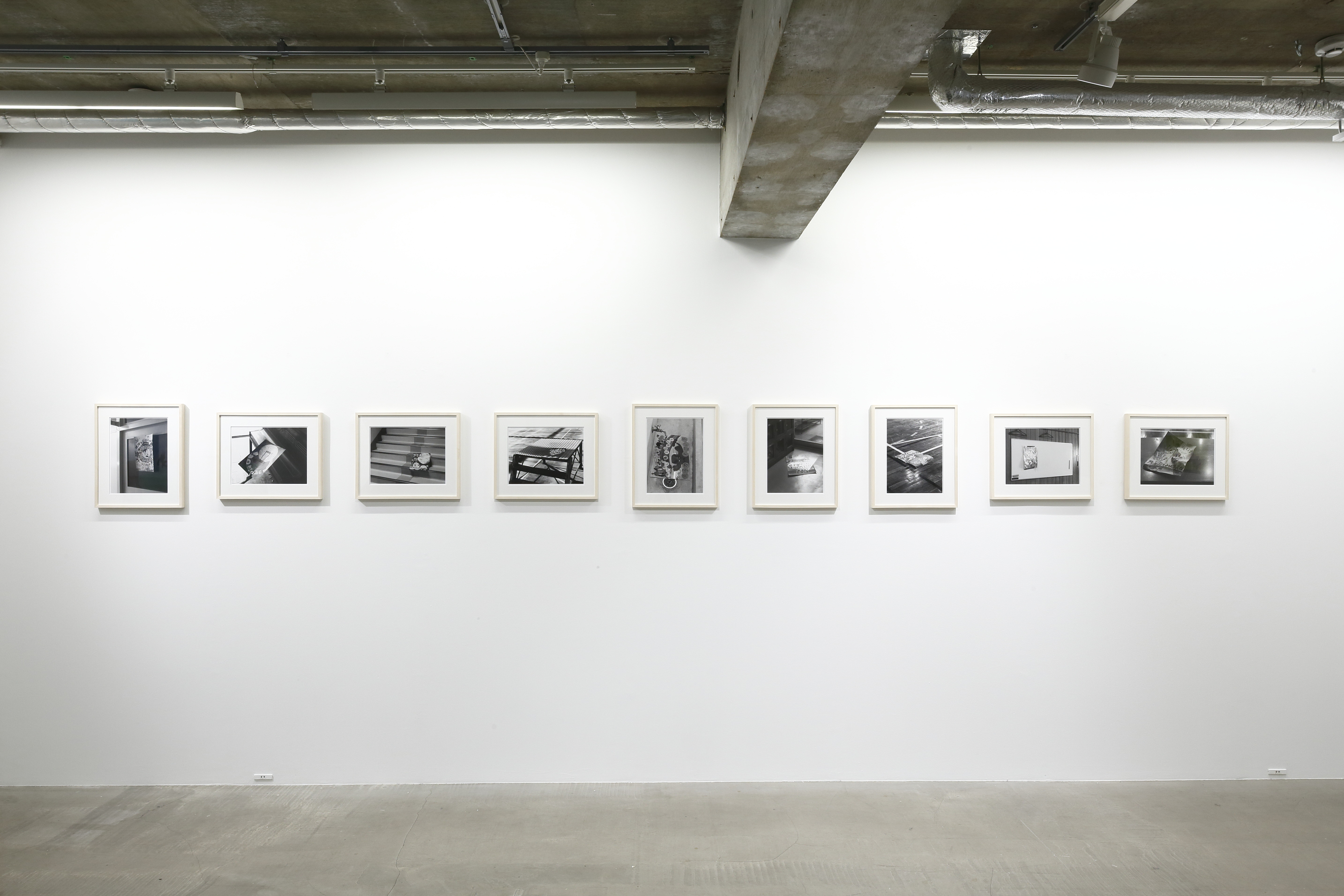 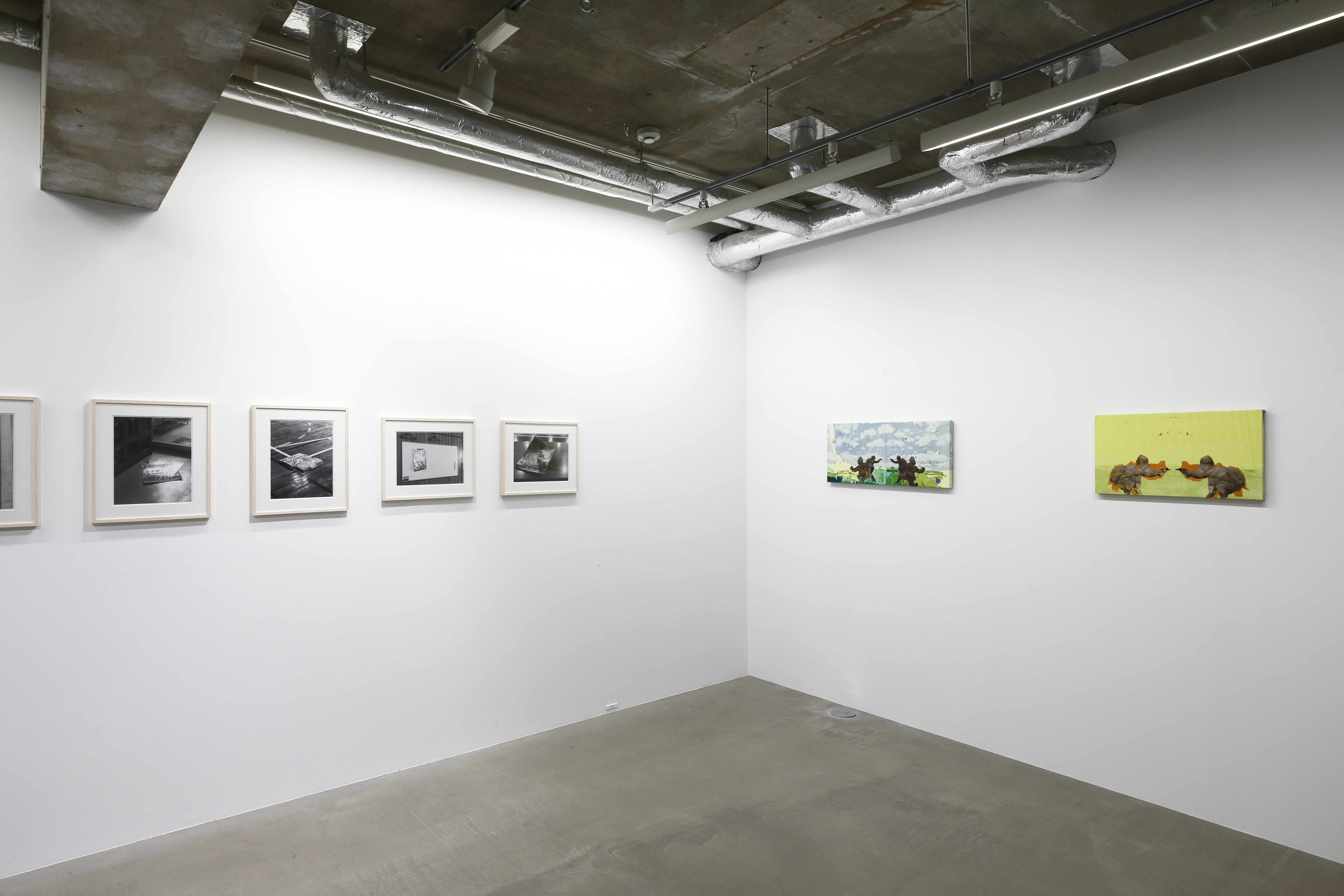 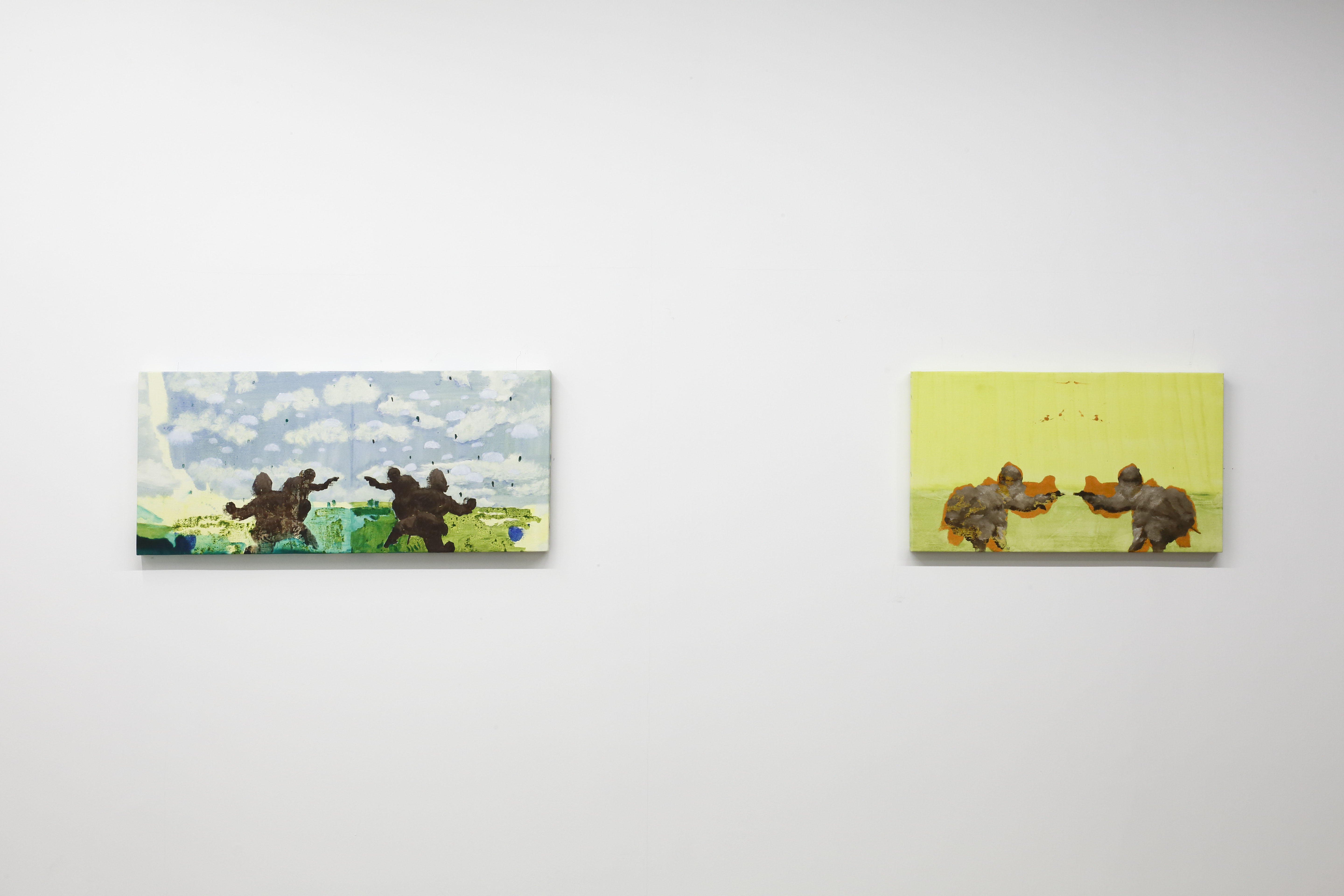 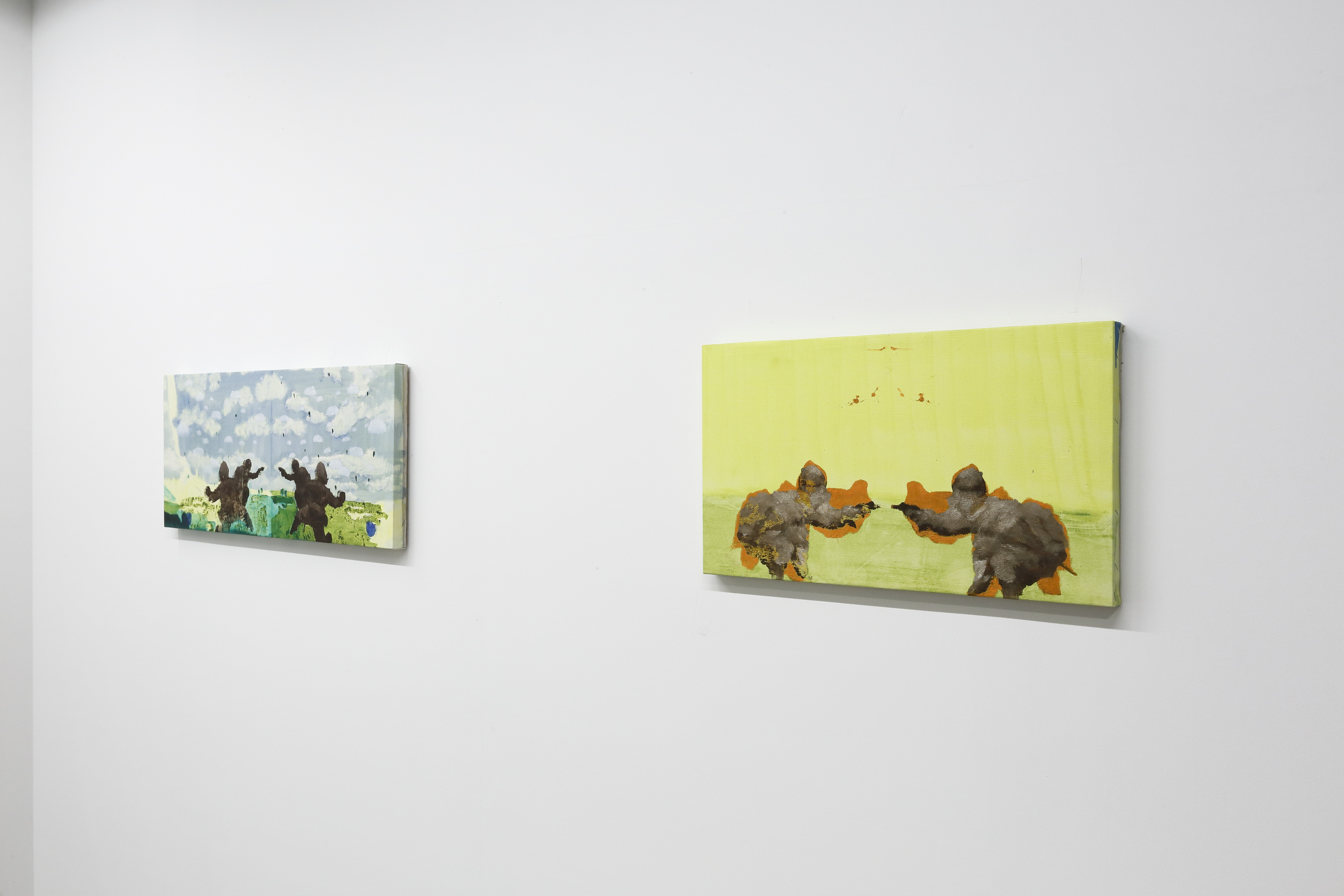 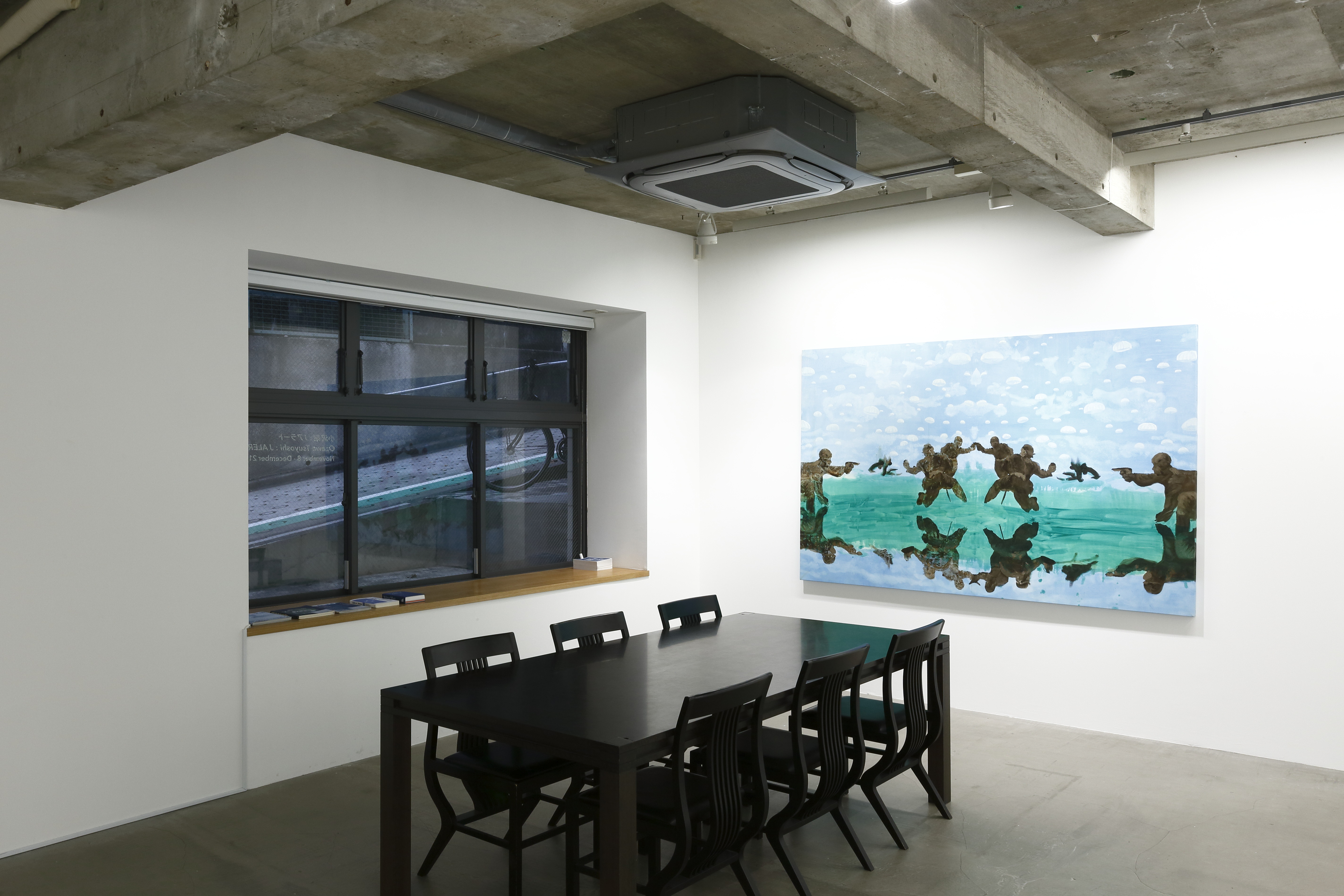 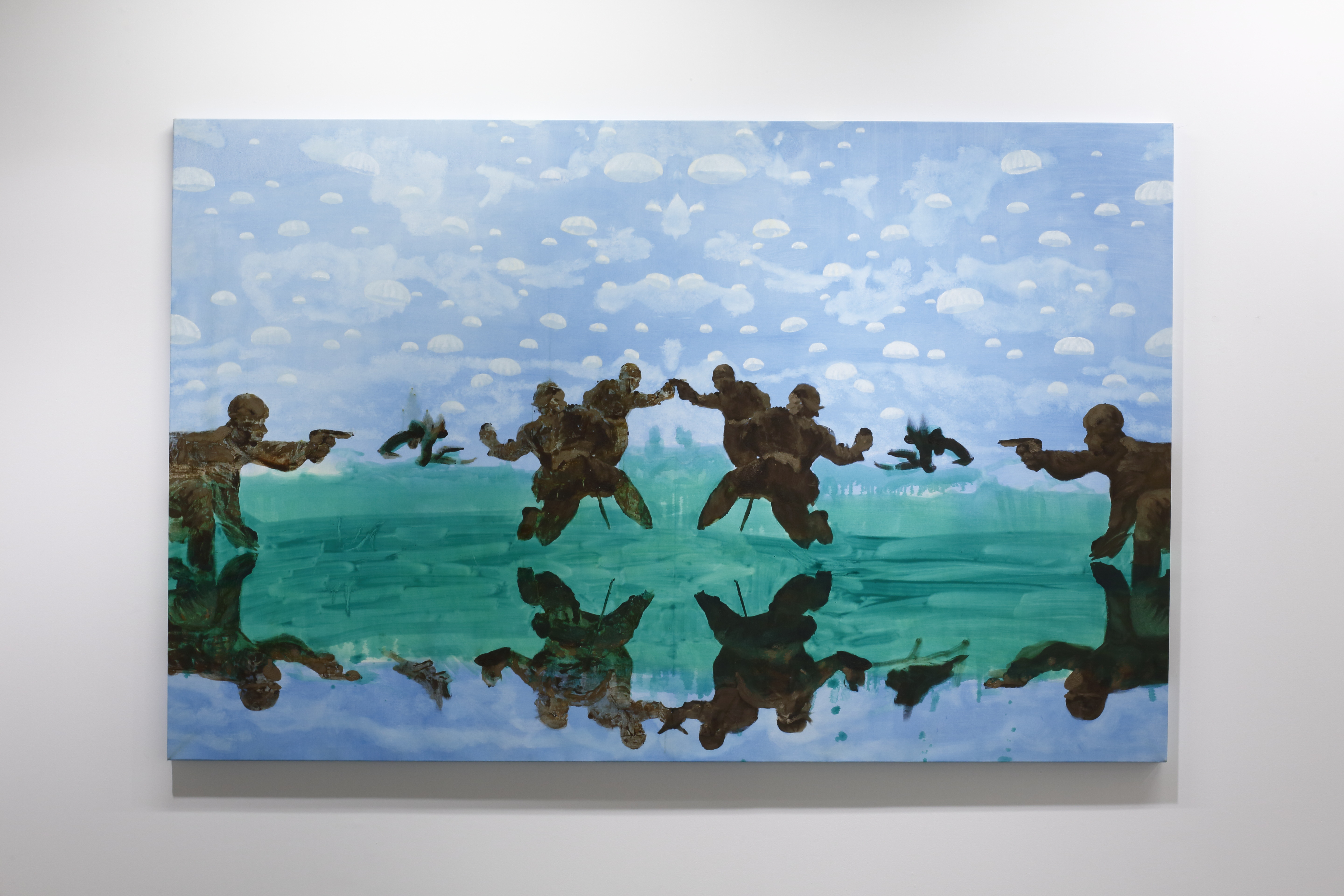 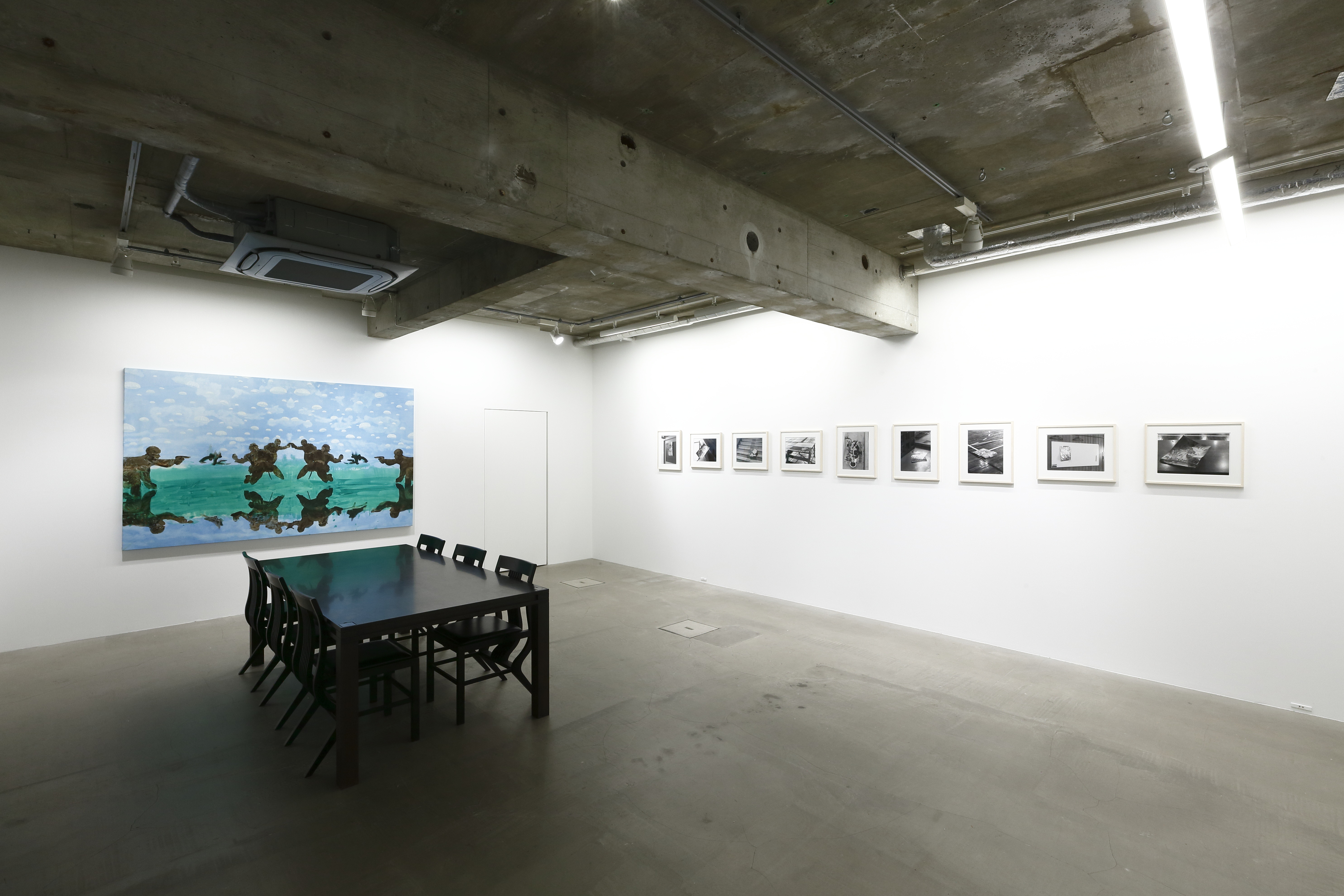 “J-ALERT is a nationwide alert system designed to rapidly warn the populace of Japan of incoming ballistic missile attacks, imminent earthquakes, and approaching tsunamis. In contrast, art spreads information at very low transmission speeds. In some cases, an artwork may continue to exist long after the death of the artist, enabling it to continue alerting humanity across multiple generations.”———Ozawa Tsuyoshi

“gnabmelaP no gnidnecseD spoortaraP esenapaJ Japanese Paratroops Descending on Palembang” was inspired by “Japanese Paratroops Descending on Palembang” by Goro Tsuruta (1890–1969), a documentary war painting that depicts a successful surprise attack on the Dutch-controlled Palembang oil field (now part of Indonesia) on February 14, 1942 by airborne troops of the Imperial Japanese Army, who dropped from the sky to occupy the oil field. This was a major victory for Japan. News of the assault was widely disseminated, inspiring martial songs and even a movie on the “sacred soldiers from the heavens.”

Noticing that in almost all the war paintings depicting the bravery of Japanese troops, the enemy at the other end of the gun barrel is absent, Ozawa produced paintings partially reproducing “Japanese Paratroops Descending on Palembang” with a mirror image alongside. The mirrored gun points back at the shooter, conveying the reality that a gun pointed at others, over time, turns on the person who pointed it. Ozawa presented this series of paintings in “Tsuyoshi Ozawa Imperfection: Parallel Art History”, a solo exhibition at Chiba City Museum of Art in 2018. It is part of his life’s work, tracing with his own hands the story of war painting, the darkest aspect of art since the advent of modern art.

Fascinated by “Photograph of Photograph”, Jiro Takamatsu’s only photographic work, Ozawa borrowed Takamatsu’s method for his “Photographs of Posters” series. Instead of photographing photos, Ozawa re-drew winning posters from a poster competition for children. Like Takamatsu, he then distorted the reproductions of the posters by folding and creasing them before placing them around an elementary school, and asking photographer Shizune Shigi to photograph them.

The posters that Ozawa re-drew were all winners of annual contests aimed at educating the public on the wonders and benefits of nuclear power and sponsored by the Ministry of Education, Culture, Sports, Science and Technology. Through this series he attempted to give form to the reality of the Ministry’s exploitation of art classes to promote propaganda to unsuspecting children in schools, an unsavory aspect of Japanese art education.

Art is expressed in the form of works that can gain additional meanings and interpretations as time goes by. The layers of thought and ideas build up slowly as the art spreads, so a warning presented in the form of art can continue to alert viewers, warning them not to make the same mistake.

Born in Tokyo in 1965. Earned master’s degree from the Department of Fine Arts of the Graduate School of Tokyo National University of Fine Arts and Music (majoring in mural painting) in 1991. Ozawa’s notable works include: his “Jizoing” series, in which he photographs statues of homemade Jizo statues situated in different environments; his Nasubi Gallery series of portable micro-galleries made from milk boxes; his “Museum of Soy Sauce Art,” in which he reproduces historical Japanese art masterpieces using soy sauce; and his “Vegetable Weapon” series of photographic portraits of young women holding “weapons” made of vegetables. Selected major solo exhibitions include: “Answer with Yes and No!” at the Mori Art Museum (Tokyo, 2004), “The Invisible Runner Strides On” at the Hiroshima City Museum of Contemporary Art (Hiroshima, 2009), “Tsuyoshi Ozawa : Everyone likes someone, as you like someone” at the Fukushima Prefectural Museum of Art and the Toyota Municipal Museum of Art (Fukushima, Aichi, 2012), “Tsuyoshi Ozawa  Imperfection: Parallel Art History” at the Chiba City Museum of Art (Chiba, 2018). Selected major group exhibitions include: “Saitama Triennale: Envisioning the Future!” (Saitama 2016) and “Yokohama Triennale 2017 : Island, Consetellations & Galapagos“ (Kanagawa 2017) and for Ozawa’s an artistic collaboration “The Xijing Men”, exploring themes related to breaking communication barriers, with Chinese artist Chen Shaoxiong and Korean artist Gimhongsok, “Xijing Is Not Xijing, Therefore Xijing Is Xijing.” at 21st Century Museum of Contemporary Art, Kanazawa. (2016), “Art and China after 1989: Theater of the World” at Solomon R. Guggenheim Museum and Guggenheim Museum Bilbao (New York, Bilbao 2018)