Horikawa Michio “Not a Stone’s Throw” 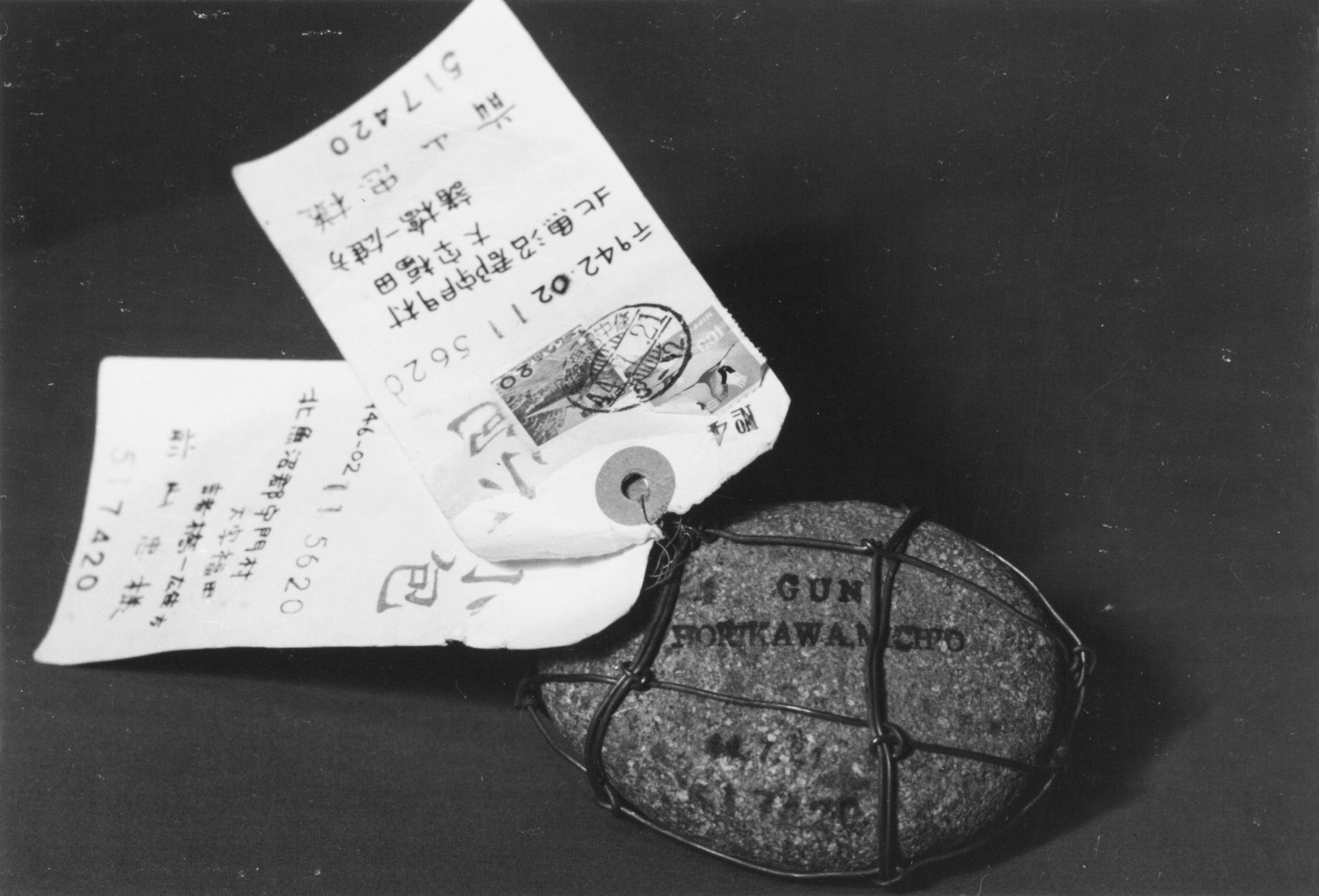 MISA SHIN GALLERY is pleased to announce Horikawa Michio’s Not a Stone’s Throw as the inaugural exhibition in the gallery’s new space, from Friday, September 28 to Saturday, November 10, 2018.

Born in Nakakubiki gun (now Joetsu City), Niigata Prefecture in 1946, Horikawa Michio joined the contemporary art collective Group Ultra Niigata (GUN) in 1967 with Maeyama Tadashi, Ichihashi Tetsuo, and others. His performance and art work, both as a core member of GUN and as a solo artist, have been based in Niigata.

Inspired by the Apollo 11 project to land on the moon and collect moon rock samples in July 1969, Horikawa, who lived in the town of Tokamachi, created stone mail art, in which he sent people stones from the earth through postal mail. On July 20, Japan time, at the same time and on the same day as the moon landing (July 20 in the U.S.), he selected eleven stones along the banks of the Shinano River, chosen in honor of Apollo 11, and mailed them to eleven people in the world of art, including Nakahara Yusuke, Matsuzawa Yutaka, and Takamatsu Jiro.

Following the mail art trend that was widely adopted throughout the world in the 1960s, Horikawa continued his stone mail art, naming his works after Apollo 12, Apollo 13, and Apollo 17 (1972), and including a number of non-Apollo editions. As a gesture of opposition to the war, he mailed a rock to U.S. President Richard Nixon as a Christmas gift in 1969, and another to Japanese Prime Minister Sato Eisaku in 1970.

In contrast to the rocks representing the Mono-ha movement, the stones of Horikawa’s stone mail art are conceptualist, eloquently opening up pathways to the outside world by incorporating history and society, transcending the limitations of the individual.

As individual members pursued their own projects, GUN as a group embraced the dream of painting big pictures in the snow. Through contact with the photographer Hanaga Mitsutoshi, who documented avant-garde artists in the 1960s, the plan began to take concrete form, and members rapidly moved into action to make it a reality. In February 1970, GUN created the huge abstract painting Event to Change the Image of Snow, using agricultural sprayers to spread four pigments—red, blue, yellow, and green—upon a vast field of snow alongside the Shinano River running through Tokamachi. It was photographed by Hanaga and Iso Syunichi, including an iconic shot of a half-naked Horikawa with a red sprayer on his back creating art in the snow.

While remaining based in the regional area of Niigata, GUN aligned itself with artistic world trends such as land art, conceptual art, and political art in the last half of the 1960s and the first half of the 1970s.

The American land art of artists like Walter De Maria returned to nature in search of the sublime in out-of-the-way places as a form of criticism of overheated commercialism. In contrast, in Japan, where the contemporary art market was still in its infancy, land such as flood plain alongside the Shinano River served as an option for exhibiting outside the system represented by art museums. This painting on the snowfield, which lasted less than thirty minutes due to continuing snowfall, certainly counts as one of Japan’s leading works of land art.

In addition to stone mail art, which was one of Horikawa’s major works, the exhibition presents datasheets containing additional information, including the names of recipients, weights, and post office receipts. Other exhibited works include a documentary portfolio of GUN’s Event to Change the Image of Snow, as well as powder sculptures that Horikawa created using pigment left over from the snowfield event.

Based in Niigata, not a stone’s throw from Tokyo or the global centers of contemporary art, Horikawa has made agile moves to transcend the distance with his stones.